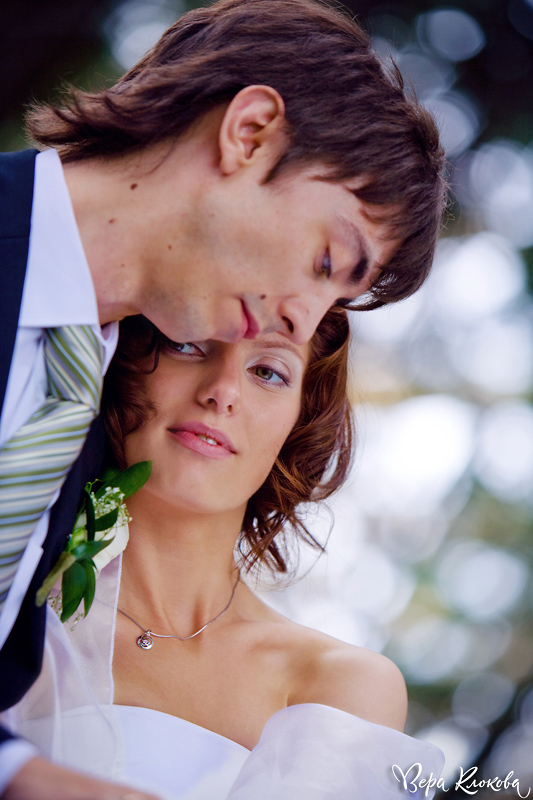 Our wedding took place on 16th of June 2007. And the fact that Vera was going to be our photographer had been decided almost a year before that Big Day. I came across Vera’s page on LJ just by chance but as a result we realized that she was exactly what we needed!

We agreed upon photo session about three months before the wedding and as it turned out in the end it was very prudent as afterwards it could be too late, this lady-photographer is in great demand. Vera has a very nice personality, she is ready to give a hint, support and assure you that everything will be fine!

The wedding was in Moscow suburbs. I was very worried that she would not find the road or would get lost on the way. But Vera arrived exactly at the appointed time, thanks to her for this as well as there are lots of other reasons for a couple to harass about on that day.

During session we have not experience any discomfort, nobody behind the camera dictated – “To move an ear a little bit to the left, nose to the right and a pupil at me.” We just hugged, kissed, laughed and no matter what we did for Vera everything was “Great! Well done! “. During the banquet Vera completely dissolved almost none of the guests had seen her. And a lot of shots surprised us.

Photos came out very beautiful we did not even imagine that we are so photogenic. It’s so nice now to look at the faces of our family members and friends! Vera with a wave of a magic wand manages to catch emotions – on one picture someone is engrossed in though listening to another person, on the other someone bursts out laughing. We are so pleased with her work, it is so great that we have such amazing wedding photos!