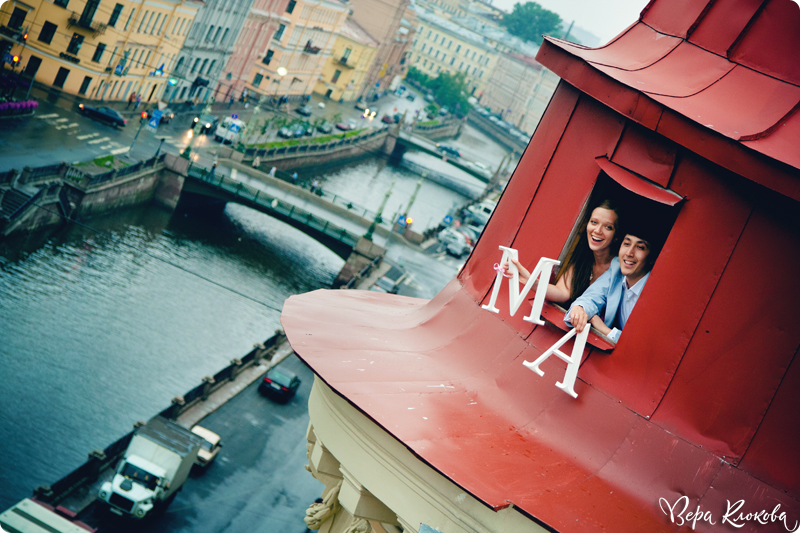 Vera! Yes, yes and yes, its been a while since we were about to write you a long letter and not just to say thank you but to tell you what was going on in our minds before photo session and of course after it :)

I must have told you that the first picture of yours (from Santorin with poppies) I accidentally saw somewhere a year before Alexy and I decided to get married. I’ve found in the internet the person who took that picture and since that moment looked through your page every few weeks just to get charged with positive emotions :) I then thought that it would be a Dream to have you as the photographer at our wedding one day but at that moment, time for this has not come yet. For a long period you’ve just been an inspiration for me and cause of high spirit for a day or week!

When we decided to get married and launched looking for a photographer I’ve started making a list of photographers, you were the first in that list but I still reviewed portfolios of more than one hundred photographers (I can not act other way I always want the best :-)) …selected just a few who were closer to my spirit (by the way sense of each photographer was very different) the only real competitive photographer to you was one from California (ha ha but he’s so far away!) so I’ve showed pictures to Alexy and we quiet quickly come up with a decision and I wrote you a letter and, then, in while we already have met you (as if it was yesterday) :))))

After the meeting we new for sure what we need! There were no doubts! You were that positive person we were looking for! Full of life and ideas, tips, hint… there just no words to describe it! When we come to you we hade a slight clew of what we want and straight away at the first meeting you gave us lots of ideas and were able to advise the place to look for different things that would turn our photo session into something outstanding. It was very important for us because as it seemed we wanted so much but just did not know what :) and while chatting with you before and after the meeting ideas started to emerge by themselves!

And in addition, we’ve got so exited that you agreed to come to Saint-Petersburg with us! Moreover you’ve got the courage to take a walk on the roofs with us! It seems that for a long time we’ve been thinking about flying over the roofs as Carlson or just walking and sitting on top of the roof observing the city from above as “Saint-Petersburg cats” but never imagined it could be possible! And then again you have already sent us contacts of a guide on Petersburg roofs! Isn’t it a miracle?! :)

From the very beginning we desired for that day to become a little cosy holiday for two and for sure it should remain in memories by means of pictures and bright impressions! Thank you so much for being a part of that day (rather two days) and helped us to capture marvellous and important moments!!!

Moreover I wanted to thank you so much from myself personally for cheering us up with your optimisms through those two days when rain was pouring, for shaking us during photo session as I absolutely did not know how to pose….for being able to make such pictures as we wanted various, positive, romantic and funny! …

Vera! I just want to say that we have not regretted for a second that you were our photographer at the wedding! All your pictures brought lots of emotion and joy of all who saw them! Most of all, I was pleased my niece, who watched a slideshow of photos with her eyes wide open while adults were busy with something else. By her reaction, I realized that it was this feeling of childish joy I’ve expected from photoshoot and you know perfectly well how to interpret these feeling! We tell everybody about you now, what a wonderful photographer you are and I know that some of them have already had a photo session with you during this period :) And I am sure one day we will repeat such deed with you again!. ..