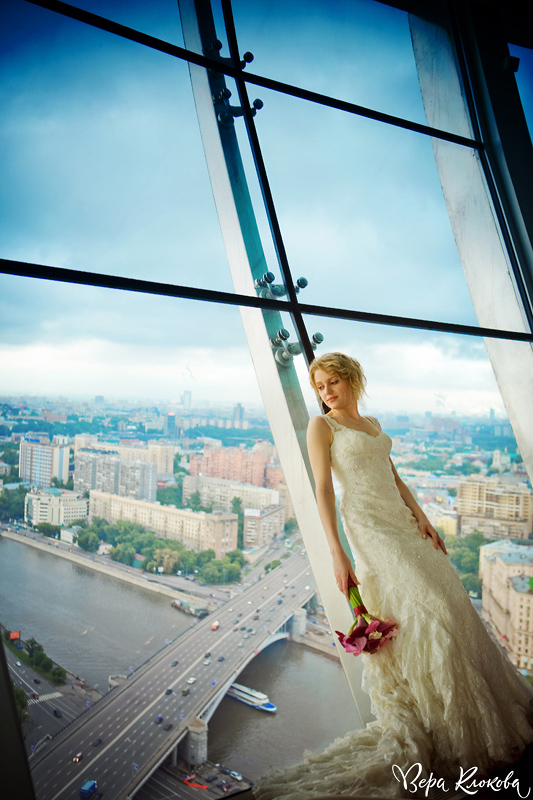 Bride’s story of the wedding: I woke up at 7:00 in the morning in a good mood, at 7:30 arrived a stylist and the process started. While he was doing my hair I was still half asleep and for the most part of time kept silence. By 9 arrived Vera, the photographer, and since that time I’ve got carried away: I was talking, joking, laughing – as I now understand it was nervousness. From the wedding worries and from the fear of what I saw in the mirror because that person in the mirror was not me. And I did not realize whether I like her or not. For a long time I touched the guy asking to wiped off my lips because my lips that I never put any lipstick on looked like Hude ones!

Denis came at 11am. I can’t describe what the feelings were like not scary or exciting but strange as if it was not really happening. There was a groom, a bouquet, a wedding car and funny driver, was a photographer, a cameraman and my sister Julia. And I with a coiffure and Huge lips (already much less noticeable, but still Huge). And in wedding dress! And that was my Wedding day! And when this last word reached my mind I felt totally weird and a little bit scared and very exciting and very joyful.
For some reason not like in fairy tales clouds still were on the sky and the sun has not come out when I appeared on the street. To the contrary it was quite chilly and gray. And then for the whole day long rain was on and off and it left a significant mark on my dress mostly gray-black.
We took a nice walk very casual and funny when we just walked and took photos, posed, tried to hide from the rain, visited the tea-house (where I was jumping on the coloured cushions and drank green tea through a straw so as not to wipe off Huge Lips), laughed, took a ride on the car around the city. We moved from one place to another and everywhere there we’ve got there were lots of brides, limousines and crowds of people on walks.

There were all sorts of stuff, which I did not even paid attention to (not working elevator, refusal to clean my shoes, not included in the room cost iron). I took off my dress and we with Vera in two sinks of our gorgeous wedding room at a quarter mains and two soaps started to clean my dress. Full post-modern and this (plus all the other emotions and nervous trembling) created such an excitement (only Dennis for some reason grumbled and cursed). Then there was a nervous trembling because we knew that at that time people had started to get together, then because we realised that we forgot to bring the music for our dance and then when I saw our banquet hall and I realized that the place is small and then cos I understood that Dennis will not avoid stepping on my dress during the dance and then due to our guitar version of “Here comes the bride”that got lost and then because I’d had to walk under the classical and pompous « Here comes the bride» and then because I already had to go, and then cos I realised that from the rain and soap all straps on my shoes stretched so Lena and I pinched new holes with a nail 5 minutes before the ceremony and then due to walky-talky of the wedding planner in which she always talked and received information on the number of guests in the hall upstairs and then due to glass of wine which she made me a drink to calm my nerves (of course!) and then of the elevator taking as to the 35 floor (like in a spy movie checking that the road is clean and talking on the radio) and finally because I finally saw my father who was waiting me in the hallway. After this I’ve got fragmental memories :-) I remember the first chords of “Here comes the bride”, I remember Dad’s face, I remember that he was going faster than I wanted, I remember the crowd of people, I remember E.V. shout, remember seeing my mother, aunt Sasha, father, no jacket on S.V. lots of variegation on the background, I remember a lot of white light from the windows … The Lady started to say something with too corny expression with sugared pauses…
And here all of that ended in a lump in my throat and I started to cry. I heard as Dennis said, “I DO,” and almost immediately repeated, “I DO” once that madam made a pause, because Lala 3 minutes before said that this was the only thing I needed to remember to do. And it turned out that I still had to put the ring on:-). Dennis did his part and my ring was on my finger already and I did not understand anything by that time and he had to prompt me about his ring. Somewhere in the background of my mind I realized that I am putting it on the wrong finger, but some commands my brain was still not able to send. Then it turned out that I did it correctly. I do not remember the music that started playing (even though we spent a week choosing it), I do not remember what happened in the next minute or two.

And then the queue of people started to give us hugs and congratulations. Although my main brain was not working proper and most of the people I for few seconds could not recognize, somewhere inside independent power supply switched on and I automatically started to burst out surprising phrases. I called people by their names I managed to recall names and even quickly analysing unfamiliar faces and names in our gift list and instantly generated connections immediately interposed generated names in phrases. Somehow insensibly we’ve got to the dance for which I worried a lot because train of the dress was still a lot longer than I expected and our chances of falling down passes over 50%. Dennis was amazing: he made tremendous steps, smiled and encouraged me and then even started singing and at that moment I realized that would not fall down! :-))) And when we fished there was a shower of rose petals of which we have no idea. This was the only moment of surprise. And it was really nice! There were dances that I really liked. But I would probably like anything that evening. I was basically just a super-principle against playing on our wedding a popular wedding song “Oh! That wedding” (which speaking between us I have never hear before but which to me represented the vulgarity at weddings) – and so under this song I danced the best! :-)) It was very cool.

And most probably my dress rather called for glamorous poses and more restrained dance I danced and danced and danced. And I didn’t want to leave because it was our wedding because it was fun because it would never happen again. We did not sleep till three o’clock at night, too many emotions for just going to bed. We ordered champagne in the room and food from the banquet launched chairs so we could look at Moscow night lights. Were sitting there staring at the Garden Ring Road and quietly discussing the wedding guests and all the events. And we both were absolutely happy of fatigue, of the feeling that everybody loves us so much and we love them, that evening was a success and wedding took place and that we finally became “ganders”. And that was so very great! I’ve always wanted to have beautiful art wedding photos and they turned almost in masterpieces! :-)

IIn general I certainly am SO delighted with the photos. Thank you! Denis is getting tired of me talking about at all the time. Leaving the reviews apart, you know Vera, as a matter of fact you without any doubt is for us a person of year 2007. I’m so glad it worked out that way: that Dennis so easily agreed to invite you, that we spontaneously came up with the idea of wearing costumes that you came to visit us in London, that you recommend the stylist Alexey and operator Sveta, that we went to the Hermitage and Novodevichy monastery, that photos were processed just in time for my birthday. There is no need even to mention that you are always welcome in our house :-)) Anyway, keep in mind that you’re already occupied for my pregnancy photo session and then a baby one – wait for email in couple of years. ;-)